A milestone in the history of science based on work of the CODATA, the Committee on Data of the International Science Council 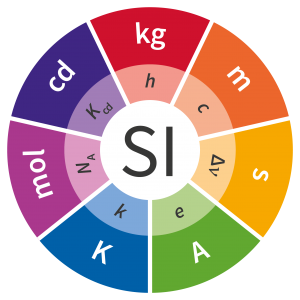 The General Conference of Weights and Measures will meet in Paris to vote on whether to re-define the International System of Units (SI) for the kilogram, ampere, kelvin and mole based on fundamental laws rather than measurement.

A unique event in the history of science is scheduled for Friday 16th November when a meeting in Versailles, France, will vote whether to re-define the International System of Units (SI) based on exact values of the fundamental constants. This would mean, for example, that the International Prototype of the Kilogram – a lump of metal which has been used to determine measurement of the kilogram since 1889 – will be replaced by a precise value deduced from fundamental laws of science. 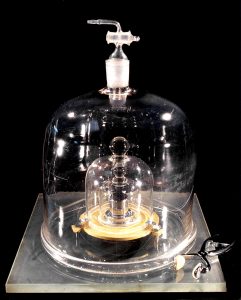 The values are the work of the CODATA Task Group on Fundamental Physical Constants, which, every few years since 1969, has summarised and evaluated the cumulative work of scientists and technologists in publishing a recommended set of self-consistent values of the fundamental constants of nature. Their most recent work[1] has been to determine the exact values of the Planck constant h, the elementary charge e, the Boltzmann constant k, and the Avogadro constants NA, so that the value of four of the SI base units — the kilogram, ampere, kelvin, and mole (measures of mass, electric current, temperature, and amount of substance, respectively) — are no longer fixed by measurement, but are deduced from fundamental laws. They will join the other three base units — the second, metre, and candela (a measure of a light’s perceived brightness) — that are already defined in this way. The change will make the units more stable and allow investigators to develop ever more precise and flexible techniques for converting the constants into measurement units.

The decision will be made by the General Conference of the International Bureau of Weights and Measures,  an inter-governmental organization, established in 1875, as the supreme authority through which member states (60 member states + 42 associate states) act together to agree the values of the fundamental constants. Does this matter? Yes, it matters profoundly. Since the earliest human civilisations, precise measurement has been a staple of honest trade and exchange, and as science and technologies have advanced, has been vital to science’s understanding of the universe, to the precision and utility of technological devices, to the terms and trustworthiness of trade and commerce, and to the everyday lives of citizens.

Geoffrey Boulton, retiring President of CODATA and member of the ISC Governing Board, commented that

“it is important that we scientists recognize the magnitude and potential significance of this achievement, as one of CODATA’s proudest moments in its 50-year history, and to applaud not only the members of its current Task Group, under its co-chairs David Newell and Barry Wood, but all their predecessors since 1969. In recognition of their achievements, the General Assembly of CODATA, held last week, agreed, by unanimous acclamation, to award the 2018 biennial CODATA Prize to the Task Group.”

The prize rewards outstanding achievement in advancing data for science. It is the first time that the prize has been awarded to a group rather than an individual.